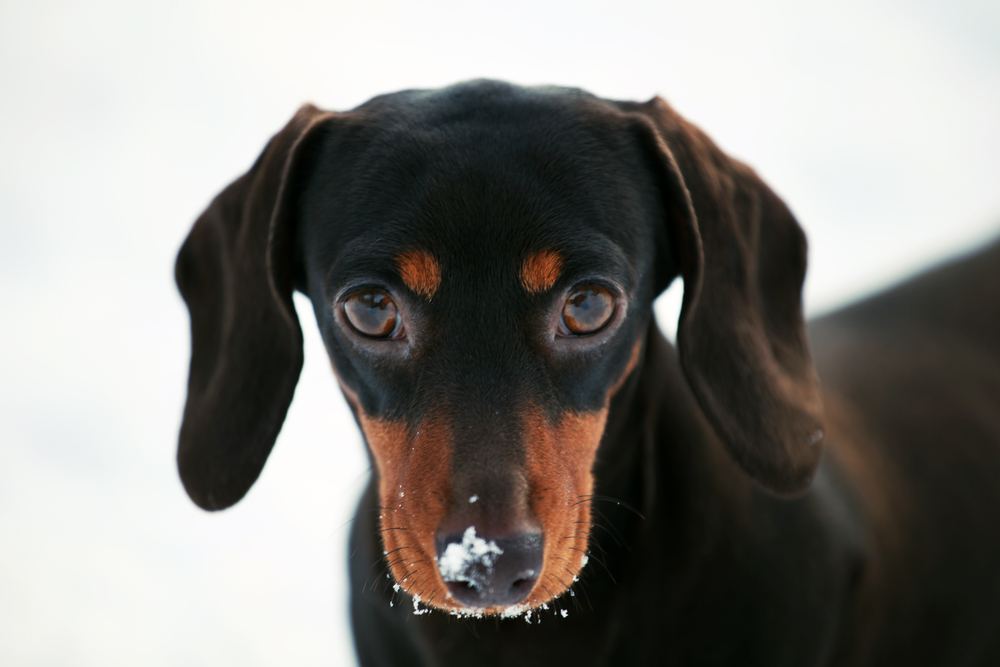 Dachshunds are clever little dogs with a keen sense of smell, high prey drive, and excellent tracking skills, all of which are qualities that made them fantastic hunting dogs many years ago.

While hunting is no longer essential to everyday life, there are still a lot of people that do it for sport.

Want to learn a little more about what makes the dachshund such a great hunter and whether you can train your own pooch to hunt? We’ll be covering all of that below, so be sure to stick around!

Yes, dachshunds are still used for hunting purposes. Although hunting is no longer a necessary part of our lives, there are still many people across the globe who still hunt for sport.

The dachshund’s intelligence, high prey drive, strong sense of smell, and elongated body make them excellent hunters, particularly for flushing out small animals like rabbits and badgers from burrows.

Are Dachshunds Bred For Hunting?

Dachshunds were and still are bred for hunting. The breed was originally created in Germany hundreds of years ago (their origins can be traced back all the way to the 15th Century!) for the purpose of hunting badgers and other tunneling animals. In fact, their name means “badger dog” in German.

The standard-sized dachshund was made to smell, track, and flush out badgers and other creatures that live in burrows. The miniature dachshund, on the other hand, was developed to hunt small animals like rabbits.

The dachshund’s petite body and fuzzy, doe-eyed appearance certainly doesn’t look scary or menacing, at least to us humans. But make no mistake – this floppy-eared pooch is a fierce hunter.

So, what exactly makes dachshunds good hunters? Read on to find out!

While all dogs have a powerful sense of smell (up to 100,000 times better than humans!), dachshunds have particularly strong sniffers thanks to their long snouts. This allows them to easily track scents, even those from old blood.

The dachshund is a pro at finding prey and wounded animals for this reason. The breed also has the ability to pick up on stale scents and follow the faintest of smells, as well as hear and feel vibrations on the ground. You can see why they are still used for hunting today!

The dachshund’s long body and short legs allow them to easily squeeze into burrows to flush out badgers and other tunneling creatures.

Miniature dachshunds were bred specifically for hunting smaller prey like rabbits as they are far smaller than standard dachshunds.

Dachshunds are fantastic diggers thanks to their webbed feet, allowing them to claw through dirt like a hot knife through butter. Dogs without webbed feet rely more on their paws and are not as quick or efficient at digging.

Even domestic dachshunds engage in this type of behavior, which is why you may notice your pooch burrowing under blankets or digging at their bed!

Anyone who owns a dachshund knows how loud they can be, especially when they’re on the alert! Although this can be a bit of a nuisance in a domestic setting, the dachshund’s deep and loud bark is very useful in a hunting environment.

The breed’s strong and broad chest allows them to bark deeply and loudly. This signals to hunters that they’ve found a prey animal even when they’re underground or far away.

Despite their small size, dachshunds have a lot of stamina due to their large lung capacity. When burrowing into tunnels, this allows them to continue digging without getting out of breath. It also allows them to chase and fight prey for long periods.

What Kind Of Hunting Do Dachshunds Do?

Miniature dachshunds are experts at tracking pheasants, mice/rats, rabbits, and short birds. Dachshunds were used to hunt wild boar in the past, too, so there are very few animals they can’t sniff out!

Are The Badger Stories Actually True?

Yes, the badger stories are true! As mentioned earlier, dachshund translates to “badger dog” in German. When hunting was a necessity, it was easier to capture small animals like badgers and rabbits than large prey.

However, small prey was difficult to chase, especially those that inhabit underground. The perfect solution was a dog that could track small animals and squeeze into burrows, hence the creation of the dachshund!

Are Dachshunds Used For Fox Hunting?

Dachshunds are sometimes used for fox hunting, but the English foxhound and American foxhound are typically used for this type of hunting.

A miniature dachshund will have no trouble flushing out a fox from its den, but it may be vulnerable to attacks. A standard dachshund, on the other hand, will be able to defend itself against a fox.

Can Dachshunds Be Bird Hunting Dogs?

Yes, dachshunds can be bird hunting dogs, but they are more suited to tracking small birds like kingfishers and pheasants. In fact, their high prey drive means they will easily chase any fast-moving target.

Do All Dachshunds Have a Hunting Instinct and Drive?

Dachshunds have a naturally high prey drive and hunting instinct, but this is usually more subdued in domestic pets. However, some dogs will have fiercer hunting instincts than others – a lot of it boils down to your pooch’s individual nature and personality.

For instance, one of my dachshunds shows very little interest in chasing small animals like squirrels, rabbits, and birds.

My other dachshund, on the other hand, is off like a shot whenever he hears the faintest rustle of leaves or a bird squawking in the distance. Even the shake of a treat packet isn’t tempting enough to persuade him to return!

Can I Train My Dachshund to Hunt?

You can train your dachshund to hunt, but it’s likely to be a difficult, long process. Modern dachshunds have been bred to be friendly, loving pets, so most of their strong hunting qualities have been bred out.

Hunting dogs are bred to highlight specific characteristics and traits, such as bravery, obedience, and a high prey drive. However, it’s very likely that your dachshund was bred to be an ideal family pet rather than a skilled hunter.

That being said, you can train your dachshund to follow commands and track scents. And if your pooch already displays a keen interest in chasing small animals like running after squirrels or rabbits in your yard, training them to hunt will be considerably easier.

Despite hunting no longer being a necessity in everyday life, dachshunds are still popularly used to hunt wildlife such as badgers, rabbits, and other tunneling animals.

The breed’s strong nose, elongated body, webbed feet, and high prey drive make them fierce little hunters! If you’ve ever noticed your pooch bark loudly at a noise or dart off across your lawn to chase a bird or squirrel, that’s their hunting instincts kicking in.

Although your dog likely comes from a long line of domesticated dachshunds bred, that doesn’t mean they’re not a hunter at heart.