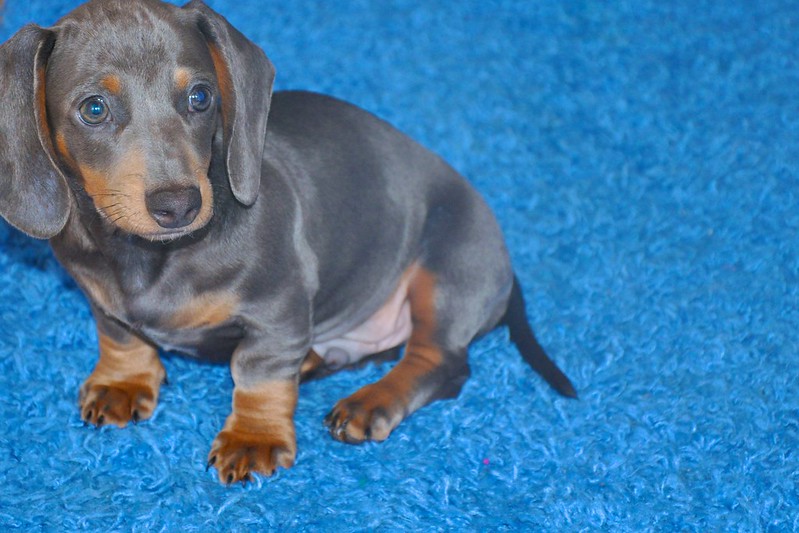 The blue dachshund is considered to be one of the most beautiful and rarest color types of dachshunds.

Ok, so they might not be a bright aqua blue, but their grayish, black, blueish coats do look extremely nice.

In this article, we will cover everything you need to know about the beautiful silvery-blue dachshund, from genetics, health, lifespan, puppy cost, and much more.

What Is A Blue Dachshund?

Most normal dachshunds are either black, brown, or reddish in color, but what about the blues?

Ok, so when people talk about a blue dachshund, they are actually referring to a specific genetic mutation that may occur in dachshund breeds.

There is a special gene that some dachshunds have in their lineages, which is known as D Locus, also known as a color dilution gene, which results in something we know as color dilution alopecia or CDA for short (the more extreme form of simple color dilution).

This is a recessive gene that causes the black spots or areas on dachshunds to be more gray than black.

On an interesting side note, dachshunds with this gene are not capable of producing pure black pigmentation.

Now, gray is of course not the same as blue, and no, blue dachshunds are in fact not really blue, although those diluted gray spots may have a bluish tinge to them, especially in the right light.

These spots often appear to be a mix of black, metallic gray, and blue. Due to this recessive gene, the blue doxie is considered to be quite rate.

That said, in terms of the appearance, this recessive gene can occur in more or less all coat types, or in other words, you can find blue doxies of the long haired variety and of the smooth haired variety, with this blue coloration also appearing in wire haired wieners, although quite rarely, and usually always in double fur layer types.

Other than that, blue doxies are the same as all others, specifically in terms of size and shape.

What Is A Double Dapple Blue Dachshund?

Ok, so a blue dachshund is one that has that recessive gene that results in the blacks looking more gray or blue than black.

These are very distinct and unusual markings, which makes the dapple dachshund quite popular.

Dapple puppies are made by breeding a dachshund with a solid coat with one that has a dapple coat.

So, based on all of that, you can assume that a double dapple blue dachshund is one that features this double dapple pattern, as well as one where either one or both of the parents had that recessive gene, thus resulting in the black looking for gray or blue that black.

Technically speaking, we have really already covered all of this, so it won’t take long.

Now, what needs to be said is that the recessive gene which causes this blue or gray coloration, the D Locus gene, must be present in either one or both of the parents in order for it to be passed onto the puppies.

That said, as long as one or both of the parents carry the gene, whether or not the parents are actually blue dachshunds is irrelevant. Sometimes the gene shows itself in the coat and sometimes not.

For this reason, because you really never know if you will get a normal or a blue dachshund, they are considered very rare.

Once again, that D Locus gene causes dachshunds to not be able to produce black pigment, thus resulting in sections that should be black appearing metallic gray and blueish in color.

Other than that, in terms of body size, body shape, and coat patterns, they look the same as all other dachshunds.

The lifespan of the blue dachshund is exactly the same as all others. This genetic mutation or recessive gene does not at all affect the expected lifespan.

Just like other dachshunds, a blue doxie on average and if healthy will live for between 12 and 16 years.

Do Blue Dachshunds Have Health Problems?

The unfortunate reality here is that due to that recessive gene that affects pigmentation, the blue dachshund is highly susceptible to a variety of skin conditions.

We aren’t geneticists, so we aren’t going to dive into the science behind it all, but we do want to provide you with a quick list of the most common skin conditions that blue dachshunds suffer from, as well as other common health issues.

Ok, so the main health concerns that blue dachshunds are faced with are skin conditions, but that said, they’re still susceptible to all of the other health risks that other dachshunds are. Let’s take a look.

How Much Is A Blue Dachshund??

What is interesting to note is that although blue dachshunds are fairly rare, they don’t cost any more or less than one that does not have this recessive gene.

On the low end of the spectrum, you might get lucky and find one for as little as $400, with the average cost being anywhere from $800 to $1,500 (usually more towards the higher end of that spectrum), with show dogs and ones coming from reputable breeders potentially costing $3,000 or more.

How Much Exercise Do Blue Dachshunds Need?

Blue dachshunds require no more or less exercise than other dachshunds. A standard or full size dachshund should get at least one hour of exercise per day, with closer to two hours being the ideal.

A Miniature or teacup blue dachshund needs at least 30 minutes of exercise per day, with closer to one full hour being the ideal.

How Rare Is A Blue Dachshund?

Now that you know more or less everything that there is to know about blue dachshunds, you can make an informed choice on whether or not you would like to get one.

There are several color patterns and variations, all of which are beautiful (in our opinion), but just make sure you do your own research and ask the breeders plenty of questions!