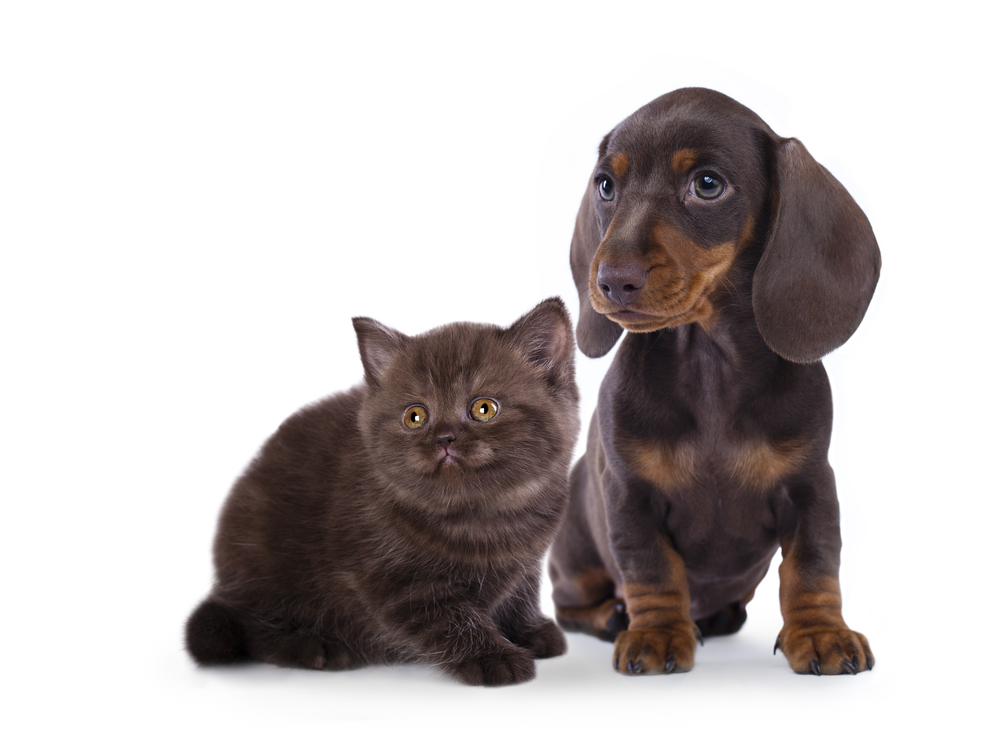 Dachshunds are small dogs, so you’d assume they’d have a lot in common with cats due to their similar sizes. However, unlike some large dogs, this breed has an extremely high prey drive, which can be bad news for cats.

So, can dachshunds live with cats? Yes, with thorough training dachshunds can be taught to live with cats though it doesn’t always work out. It really depends on your dog’s personality, traits, background, and age. It’s important to limit your expectations, especially if you are introducing a cat into your dachshund’s home which is often difficult.

If you’re thinking of adding a cat to your dachshund’s home or vice versa, we’ll be going over some tips and training methods to make the introduction go as smoothly as possible.

Do Dachshunds Get On With Cats?

Dachshunds can get along with cats with training, but this varies case by case. Your dog’s personality, background, age, and past experiences will influence their tolerance towards cats and whether they will accept a feline into their home.

It’s a lot easier to bring a dachshund into a household with an existing cat than vice versa as the dog will not have had time to establish its territory yet.

Additionally, teaching a young dachshund to live with a cat is more straightforward than with an adult as puppies are more likely to view the cat as an authoritative figure.

Does Cat And Dachshund Gender Matter?

Dachshunds tend to get along better with cats of the opposite sex, especially if they are male.

There are various theories as to why this is, but one popular belief is that male dogs are less likely to view female cats as a threat to their territory and mating instincts.

It’s commonly assumed that male animals are more boisterous and affectionate than their female counterparts, who are often moody and reserved. These traits can be reversed in certain animals and dog breeds, though.

In dachshunds specifically, males are normally cuddly, easy-going, and playful, while females can be independent, timid, and temperamental. However, a lot of your dog’s traits come down to their personality.

For instance, I’ve owned a few male dogs that have been the complete opposite of affectionate and females that enjoyed nothing more than being in the company of humans. Every dog is different!

That said, if you currently have a male dachshund and are looking to add a cat to your household, it might be easier to select a female feline to prevent any potential territorial issues.

Could My Dachshund Kill The Cat?

Dachshunds are scent hound dogs that were originally bred to hunt badgers, rabbits, foxes, and other small animals. As a result, this breed has a high prey drive that can be difficult to suppress even with extensive training.

Cats can be perceived as prey to dachshunds, especially as a cat’s natural reaction to a threatening or frightening situation is to flee.

This sudden movement will often prompt your dog to chase your cat and, in some extreme cases, critically injure or kill them.

So, yes, your dachshund could kill your cat if their prey drive is significantly high or they’ve not undergone training to build up their tolerance to felines.

Will A Cat Attack My Dachshund?

Due to their hunting instincts, dachshunds can attack cats if they perceive them as prey animals.

This is most common in dachshunds who are poorly socialized or trained, as well as those with aggressive and boisterous personalities.

Even well-behaved and trained dogs should never be left alone with a cat unsupervised as you can never guarantee that they won’t snap or suddenly act out of character.

Tips to Introduce Your Dachshund To A Cat

It’s important to introduce your dachshund to your cat slowly and gradually so you don’t overwhelm either party.

Rushing the training process won’t make things go any quicker and will likely lead to an undesirable outcome (i.e, a dog who refuses to accept a cat and vice versa!).

If you’re not sure how to plan the first meeting between your dachshund and cat or you’re struggling with training, here are some tips and tricks to help you.

Put Your Cat In A Secure, Enclosed Room

First thing’s first, put your cat in a safe room that your dachshund can’t get access to, whether that’s a spare bedroom or study.

Put all of your cat’s belongings inside, including their litter box, food dish, water bowl, and toys.

Keep Your Dachshund And Cat Separate With A Stair Gate

Block off the stairs or a room with a stair gate to separate your cat and dachshund. This allows both animals to smell and see one another without being in touching distance.

It also gives your cat an exit point if they feel threatened or scared.

Next, you’ll need to swap both your cat’s and dog’s scents to help them grow accustomed to one another. Switch their baskets or blankets around to get them used to each other’s odors.

You can also stroke your cat and immediately pet your dog, as well as rub your hands across the furniture and other objects in both animals’ living quarters.

Let Your New Pet Get Used To Their New Home

If your cat is a newcomer, give them plenty of time to explore their new home while your dachshund is out of the house.

In contrast, if your dachshund is the stranger, encourage them to explore their surroundings while your cat is closed off in another room.

Before you go ahead and introduce your dachshund to your cat for the first time, it’s a good idea to exercise them to tire them out and blow off steam.

Doing so will make your dachshund less likely to chase or play with your cat as they won’t have as much energy.

Keep Your Dachshund On Leash And Let Your Cat Out

Don’t force them to come over if they are nervous or frightened as it will only make matters worse. Be patient and let your cat come over in their own time.

Once your cat is on the other side of the stairgate, allow them to watch and sniff your dachshund and vice versa. If your dog barks, growls, jumps, or acts aggressively, firmly tell them “no” and guide them towards the door.

Try again and repeat the process if your dachshund misbehaves again. Don’t scold or yell at your dog as it will increase their and your cat’s anxiety/stress levels.

Your cat may run away or retreat back to their room, which is completely normal. Leave them be and give them time to work up the courage to investigate your dog a second time.

While it’s important to discourage poor behavior like barking and growling during the introduction, it’s equally as vital to reward calm behavior to let your dog know they’re doing a good job!

Dogs are more likely to repeat an action if they are rewarded for it, especially if that reward comes in the form of a tasty treat.

If your dachshund acts calmly around your cat and doesn’t bark, be sure to shower them with praise and offer a small treat to help them understand the appropriate way to act around a feline.

Once your dachshund and cat seem relaxed in each other’s presence, open the stair gate so they can properly meet. Keep your dachshund on a leash during this process.

Like with previous steps, if your dachshund lashes out or is too rough, deliver a stern “no” and guide them back towards the door. Offer encouragement and praise if your dog continues to be calm around your cat.

Take Your Dachshund Off Their Leash

The final step in your dachshund’s training is to let them check out your cat off-leash. Supervise both animals and stay within touching distance of your dog so you can act quickly if things take a turn for the worst.

If the situation becomes overwhelming to you or your cat, cut the meeting short and allow both parties time to calm down. Attempt the introduction again another day once your dog and cat are no longer stressed.

Alternatively, if the introduction goes according to plan, be sure to give yourself and both pets a pat on the back. Make sure you still keep a watchful eye on the pair to be on the safe side.

Don’t Leave Your Dachshund With Your Cat Unattended

Even if your dachshund and cat are seemingly getting along, you should never leave them alone unsupervised. Either your dog or your cat could snap without warning, resulting in the injury of the other.

If you need to run some errands or won’t be at home, keep your dachshund and cat separate until your return.

Don’t Be Disheartened If the Introduction Fails

Not all dachshunds can be trained to co-exist peacefully with a cat, so don’t beat yourself up if the introduction doesn’t go as well as you expected.

Some dogs may take longer than others to learn the appropriate way to behave around a cat, while some may never learn to accept a feline into their household.

Continue with your dog’s training to help them build up their trust and tolerance towards your cat, but if things don’t seem to be working, it might be time to call it a day.

Forcing both pets to enjoy being in each other’s company will only lead to more stress, anxiety, and aggressive tendencies.

Unfortunately, due to how prey-driven dachshunds are, it can be difficult to house them with other animals.

Cats are by far the best choice as the breed is less likely to view them as prey than small pets like rabbits, hamsters, guinea pigs, and mice.

However, dachshunds can get on exceptionally well with other small breeds of dogs, particularly hound dogs and those with similar temperaments. Italian greyhounds, chihuahuas, beagles, toy fox terriers, and pugs are among some of the breeds that are compatible with dachshunds.

Although large dogs can live harmoniously with dachshunds, you need to be careful as they could hurt your dachshund if they play too rough.

Large dogs often don’t know their own strength and their clumsiness could critically injure your dachshund.

Dogs and cats are often perceived as nemeses, especially in cartoon shows, and while dachshunds can certainly be unfriendly or downright villainous towards cats (and vice versa!), that doesn’t mean they can’t become friends or be tolerant of one another.

With training, dachshunds can eventually learn to coexist with a cat but bear in mind that this process can be long and arduous.

It’s important to reel in your expectations as, otherwise, you’ll end up being disappointed if things don’t quite go as well as you envisioned.

If your dachshund isn’t responding to training or your cat is becoming increasingly stressed out from their presence, you might need to work out a way where both pets can occupy the same household while leading entirely separate lives.

In extreme cases, rehoming either your cat or dachshund might be the only solution.