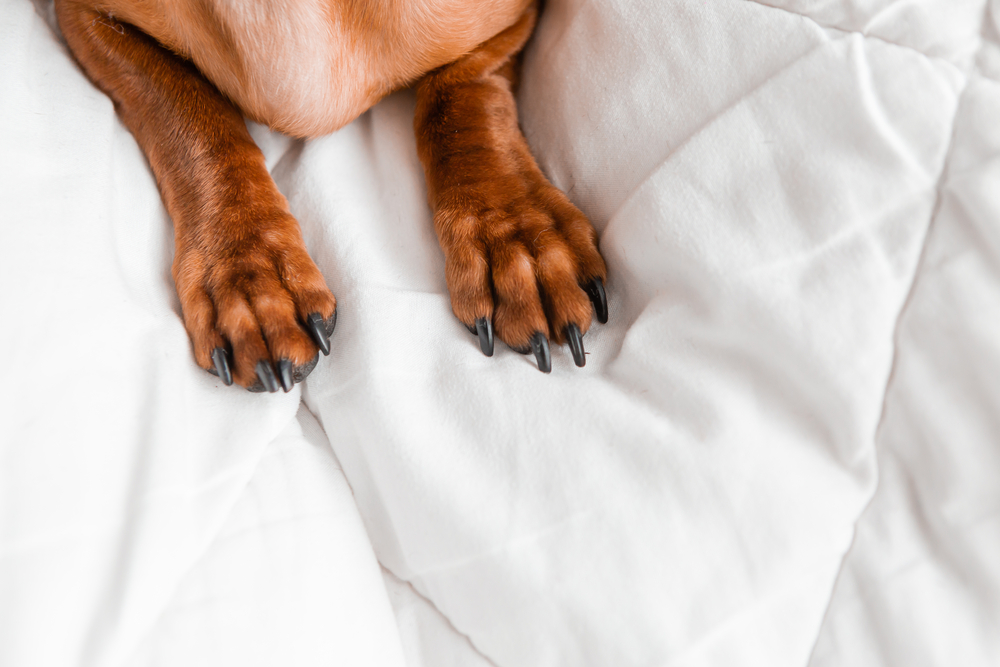 If you’ve ever felt an extra toe on your dachshund while you’re clipping their nails, it can certainly be alarming at first. However, this strange appendage is called a dewclaw, and can appear on both the front and back legs.

If you were wondering “do dachshunds have dewclaws?”, the answer to that question is yes! Dachshunds are born with dewclaws, but they usually only occur on the front paws. Dewclaws help dachshunds maintain balance while running, and also give them better grip moving across different terrains.

Not sure of the purpose of dewclaws or if there are any risks associated with them? We’ll be explaining all of that below!

Do Dachshunds Have Front And Back Dewclaws?

All dogs are born with dewclaws (also known as vestigial claws!), including dachshunds, but they are normally only found on the front paws. It’s actually very rare for dogs to have back dewclaws.

However, in some breeds like the Briard and the Great Pyrenees, back dewclaws and even double dewclaws are a common occurrence.

While it’s unusual for dachshunds to have dewclaws on their back paws, that doesn’t mean it can’t happen.

If you spot extra toes on your dachshund’s hind legs, then it’s very likely that they have rear dewclaws!

What Is The Purpose Of Dewclaws?

Dewclaws work similarly to human thumbs, allowing dogs to better grip objects and surfaces, such as holding items to chew on, navigating slippery terrain or tight turns at high speeds, and climbing onto things.

Vestigial claws also provide additional traction and support to your dachshund’s wrist (carpal) joints. In fact, some dogs whose dewclaws are removed are at a higher risk of developing foot injuries and arthritis.

That being said, only dewclaws attached by bone have a purpose – the usefulness of those that are only attached by the skin isn’t quite known.

These extra claws are part of a dog’s evolutionary history, dating back to more than 40 million years ago to one of the canine’s earliest ancestors: Miacids.

These cat-like mammals were skilled climbers and had five toes on their paws, enabling them to live in treetops and easily maneuver from branch to branch.

Miacids eventually evolved to live on the ground and became master hunters, not dissimilar to the modern dog.

As these animals no longer needed to climb, evolution moved their legs forward to help them chase fast-moving prey at high speeds.

This change allowed them to walk and run on their toes but also meant that their fifth toe was now unable to touch the ground.

Should Dachshunds Have Their Dewclaws Removed?

Unless your dachshund’s dewclaws are regularly causing problems, there’s no reason to remove them.

Besides, front dewclaws attached by bone help your dachshund maintain balance while running, particularly on slippery surfaces such as laminated flooring, as well as provide support to their wrist joints.

In addition, some dogs use their vestigial claws to hold objects and climb onto things, so they can definitely prove useful.

If your dachshund has loose dewclaws or double dewclaws (the latter is very rare in this breed, though!), then your vet may recommend removing them to prevent future injuries.

Alternatively, if your pooch develops a disease like a cancerous tumor in their paw or is constantly tearing their dewclaws, then removal would be the best way forward.

Speak to your vet if your dachshund is frequently suffering from issues with their dewclaws or you notice any abnormal growths around their paws.

Some owners remove dewclaws for aesthetic purposes and to “enhance” their dog’s appearance in the show ring.

However, this procedure should be done in puppies who are only a few days old. The area will also need to be numbed with a local anesthetic.

Most veterinarians will refuse to remove a dog’s dewclaws unless they are causing pain or issues, so you’ll need to speak to your vet if you want your dachshund’s dewclaws removed for cosmetic reasons.

As mentioned above, it’s best to leave your dachshund’s dewclaws alone as long as they are not causing any harm!

Can Dewclaws Cause Problems For My Dachshund?

Dewclaws can cause problems for your dachshund if they become broken, torn, infected, or overgrown, especially if they are loosely attached to the skin.

Signs like excessive licking of the paws, crying in pain, bleeding, or a foul odor can be a cause for concern, so seek veterinary attention as soon as possible.

Overgrown dewclaws are most common in elderly dachshunds or those with lots of fur around their paws, the latter of which can hide the vestigial claws and make them more likely to be missed during routine grooming.

If the nail grows too long, it will curl into the nail bed, which can lead to pain, inflammation, and infection.

Treatment includes trimming the overgrown nail and sometimes the skin that the nail has grown into, as well pain relief medication and antibiotics.

Active dachshunds or dogs with loose dewclaws are most at risk of injury. If the nail becomes caught on something or, in severe cases, is torn off completely, it can bleed extensively.

The claw may need to be removed if it’s torn but still connected to your pooch’s leg, though most of the time, the nail will regrow.

If only a small part of the nail is broken, it can be cut off with nail clippers. Bandages, antibiotics, and pain relief medication may be needed to prevent infections and reduce soreness.

So, to sum everything up: all dachshunds are born with dewclaws, but they are normally only located on the front paws!

These extra toes serve little purpose today, but some dogs use them to assist with gripping, climbing and running. Vestigial claws attached by bone also aid with wrist joint stability.

Unless your dachshund is frequently suffering from dewclaw injuries or infections, there’s no need to remove them.

Contact your vet if your pooch has a severely broken or infected declaw, especially if they display additional symptoms such as limping, excessive bleeding, inflammation, or a foul odor.