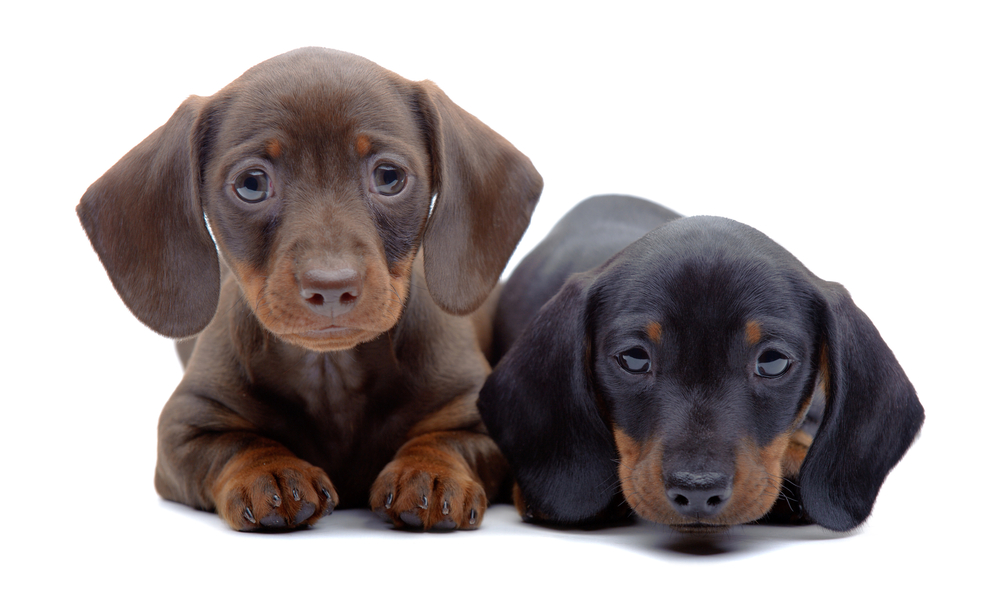 Dachshunds are one of the most loyal, charming, and sweet-natured dogs you can own, but you might have wondered whether there are any differences between male and female doxies.

So, male vs female dachshund: which is better? Both sexes have their perks and drawbacks, with males normally being more cuddly, and females being more self-assured.

It’s important to understand common traits of both sexes so you can make the right decision for your family, which is why we’ll be explaining the differences between male and female doxies.

Despite looking practically identical to female dachshunds, male doxies are fairly different when it comes to personality and temperament!

Firstly, male doxies are normally more loyal and attention-seeking than females, which means they’re more likely to follow you around everywhere and cuddle with you.

Although male and female dachshunds tend to bond closely to one person, males typically cling quicker and more intensely.

This can lead to overprotectiveness and behavioral issues, so it’s important to train your dachshund not to become possessive of you.

Male doxies also have a tendency to hump objects and mark inside the home, even more so if they are unneutered.

Neutering your doxie can calm and mellow them out, but it won’t completely eradicate the urge. On the plus side, males are often less moody than females as they don’t have heat cycles!

Compared to female dachshunds, males are much more playful – they remain like puppies well into adulthood!

They’ll happily play with toys or engage in a game of fetch with you. They get along well with kids, but they can be a little clumsy around them, so this is something to keep in mind.

Male dachshunds are usually more tolerant of other pets as they are more curious and outgoing, though some training will most likely be necessary as all doxies have a strong prey drive!

While it’s no secret that every dog loves treats and snacks, male dachshunds are particularly food-orientated.

This makes training a bit easier initially, alongside their eagerness to please. However, males can be easily distracted, so you might not hold their attention for very long.

However, that doesn’t mean they aren’t loyal or loving companions! Females still enjoy spending time with their favorite person, but it’s usually on their own terms.

Once they’ve had enough attention, they may retreat to their basket or find a comfy spot on the couch for a nap rather than a warm lap.

Compared to male doxies, females are less playful and clownish as they mature faster.

Additionally, females are prone to mood swings, especially when they’re in heat. Don’t be surprised if your doxie is sweet and gentle one minute, and grumpy the next!

Unlike males, female doxies are less likely to try and claim dominance over you or become territorial, but that doesn’t mean they don’t have their own ways of being mischievous.

Females can be sneaky when it comes to getting what they want. You always have to think two steps ahead!

This intelligence also makes training females slightly easier, particularly as they are less likely to get distracted than males.

Females can be aggressive with other dogs, especially with other females. Contrary to popular belief, two male doxies are not usually aggressive towards one another, unless there is a female in heat nearby.

It’s also important to note that female dogs are more likely to develop littermate syndrome, which can lead to an array of behavioral issues.

It’s caused when two siblings, especially those of the same sex, are raised in the same household past 8 to 10 weeks of age.

It can also occur in puppies from different litters if they were brought up together at the same time.

Dogs with littermate syndrome become so co-dependent on one another that they are unable to function normally if they are separated from each other.

This can make it difficult for both dogs to interact properly with people, other dogs, and any scenario when they are not together.

Are Male Or Female Dachshunds Easier To Train?

Dachshunds as a whole can be difficult to train due to their stubbornness, which stems from their hunting instincts as they were originally bred for tracking small animals.

However, females tend to be slightly easier to train than males as they are not as easily distracted. You’re more likely to retain their attention for longer periods.

In addition, females don’t normally mark inside the home, whereas males do. This makes potty training less difficult, but bear in mind that doxies, in general, are notionally hard to housebreak.

That being said, females aren’t as food-oriented as males, so you might need to offer them particularly enticing treats and rewards to persuade them to obey commands.

Which Sex Of Dachshund Is Better With Other Dogs?

Due to their easy-going and friendly nature, male doxies typically get on better with other dogs than females.

They typically get on well with male and female dogs of a similar size, but they can be a bit timid around larger dogs.

In addition, males may be more aggressive than usual if around other male dogs when a female in heat is present.

Female doxies can be aggressive towards other dogs, especially around females. They are prone to mood swings and streaks of grumpiness when in season.

If you’re planning on introducing a second dog to your home, it’s best to opt for a male pooch as female dachshunds can be hostile to other females!

Males, however, can happily live with male and female dogs with very few problems, but you may still need to train them to accept a new canine.

Male and female dachshunds look pretty much the same, though males tend to be more muscular. Females normally have deeper chests, which makes their legs look shorter.

Additionally, male doxies tend to have mellower coats, so they’re slightly softer to the touch.

Which Sex Of Dachshund Is Best For Families?

All doxies are known for their loyalty and affectionateness, but male dachshunds are particularly loving. They love nothing more than playing or curling up for a snooze with their family members.

Females enjoy attention, but they also like their own space. They can be snappy or nippy if their personal bubble is invaded.

Males can be a better fit for families and households with kids for this reason. They are playful and energetic, so will certainly keep your children entertained, and vice versa!

However, male dachshunds can be goofballs and clumsy, so they might knock over tiny humans or play a little rough without realizing it.

You should always supervise your children when they are interacting with your dachshund, as you can never be too careful.

Even the most gentlest dog can flip on a switch if they are spooked or accidentally hurt.

It’s also worth teaching your kids how to handle and interact safely with your dachshund to prevent any issues or possible conflict.

Which Sex Of Dachshund Is A Better Guard Dog?

Despite their small size, doxies are fierce and brave little dogs. Both females and males can be great guard dogs, though in slightly different ways.

Male dachshunds can be overprotective of their owners, especially those they are closest to.

While this can certainly make you feel safe and loved, it can also lead to problems if they feel their relationship with that person is threatened by something or someone.

Females can be similarly protective due to their caginess and distrust towards strangers. They are wary around unfamiliar people and will be quick to react if they hear an odd or abrupt noise.

This can give you some peace of mind at home as you’ll know your doxie will always alert you if they hear or see something amiss!

Is It Better To Get A Male Or Female Dachshund?

There’s no clear winner regarding which sex of dachshund is better as it mostly boils down to what traits you’re looking for in a dog.

Male doxies tend to be more laid-back, friendly, and playful, which might make them a better option for families with young children.

They normally get on well with other dogs in the same household, both with male and female pooches.

If you have another dog or plan on getting a second pooch at a later date, then a male doxie might be a better choice as they’re less likely to exhibit aggression or be territorial.

Females, on the other hand, are more self-assured, reserved, and slightly easier to train.

They like to have their own space, so they could be a good fit for adult-only households or owners who want a more independent dog.

They are great watch dogs as they are naturally cautious of unfamiliar people and strange noises. However, females can be aggressive with other dogs, especially those of the same sex.

Bear in mind that there are always exceptions to the rule when it comes to both sexes. Some female doxies may have traits that are commonly seen in males and vice versa.

For instance, my female doxie is the sweetest, gentlest pooch I’ve ever known. Her favorite pastime is cuddling up on the couch, and she begs for belly rubs and scratches constantly.

She loves playing with kids and she doesn’t bat an eyelid when meeting new people and dogs.

My male doxie, however, is a lot shyer and reserved. He likes the occasional fuss, but he’s quick to tell you when he’s had enough. He’s also impatient with small children and dislikes other dogs.

As you can see, every dachshund is different, and a lot of a dog’s nature is influenced by their individual personality.

Dachshunds can make fantastic companions, but there are a few differences between sexes that you should consider before adding this breed to your home.

That being said, every dachshund has their unique charms, no matter whether they are female or male.