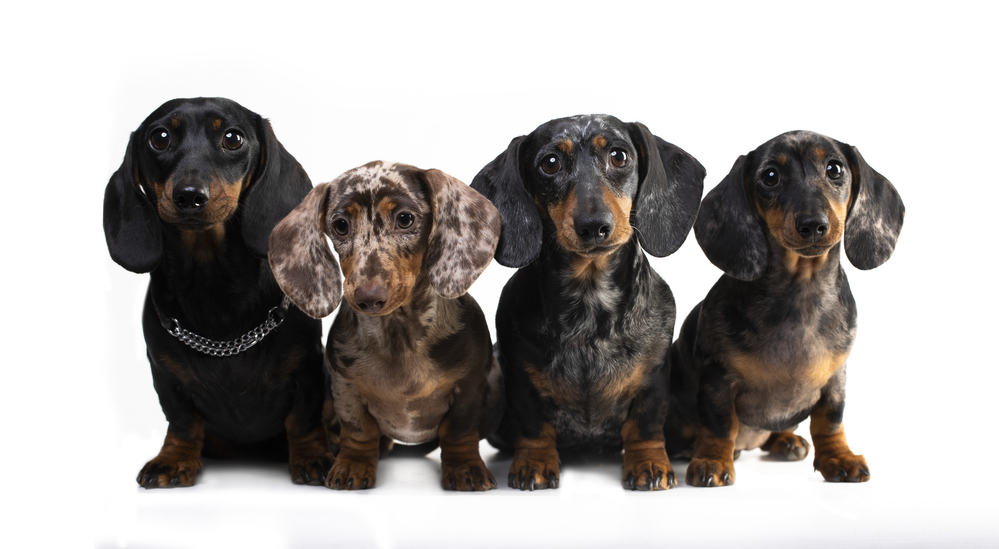 Dachshunds come in a wide variety of coat colors and patterns, but one of the most striking and unique markings is dapple.

So, what is a dapple dachshund? A dapple dachshund has a spotted or speckled look to their coat. While stunning, some dapple dogs, especially those that carry the double dapple gene, are at a higher risk of certain health issues, including blindness and deafness.

Thinking of getting a dapple dachshund or simply want to know more about this rare coat pattern? We’ll be going over everything you need to know about both the single and double dapple dachshund, including common health problems and how to identify them.

A dapple dachshund has a speckled or spotted pattern on top of their base coat color, which looks like they have been splattered in paint. Dappling can occur in any coat color, including red, black, blue, chocolate, cream, chocolate and cream, black and tan, and many more.

Depending on the dachshund’s coat color, the intensity and visibility of their dappling will differ. In some dapple dachshunds, the pattern is very prominent, whereas in others it is much more subtle.

What Is a Dapple Dachshund?

A dapple dachshund is a doxie with a dapple pattern on their coat, giving them a unique speckled appearance. Even dogs with one or two small dapple splodges on their coats are considered dapple.

This type of dachshund is created when a solid color dachshund is bred with a dachshund who carries the merle gene, the latter of which causes a dappling effect.

The merle gene is recessive, so when a dapple dachshund is bred with a non-dapple doxie, it’s highly likely that some of the puppies will be dapple. However, it’s still possible for the litter to contain entirely non-dapple puppies.

Double dapple doxies also have more splodges of white on their coat, as well as an icy shade to their face if dappling occurs in this area.

A loss of pigment in the nose and blue eyes are common in double dapple doxies, especially if their face is white, though some dogs may have one or two dark eyes.

While double dapple dachshunds certainly look striking, they are more prone to several health issues, particularly involving their eyes and ears. Normal dapple dachshunds, on the other hand, are at a much lesser risk of these types of problems.

The reason why double dachshunds are so unhealthy is that they carry the homozygous double merle gene (also known as “lethal white” or “double-blue”). Dogs with this gene are primarily white in color and are usually blind, deaf, or both.

Unfortunately, there is also a risk of physical deformities, including puppies being born without paws, eyes, and other vital organs.

Dogs with a single merle gene are much less likely to develop or be born with these types of health issues, though loss of eyesight and/or hearing is still possible.

Most reputable dachshund breeders will never allow two dapple dachshunds to mate as it is unethical.

In fact, both the UK Kennel Club and American Kennel Club refuse to register double dapple dachshunds, as well as actively discourage the breeding of them.

How To Spot A Double Dapple Dachshund

Identifying a double dapple dachshund can be difficult, even for expert doxie breeders. It can be even more challenging if the dog has a mix of coat patterns, such as piebald and brindle.

Additionally, certain coat colors like cream and red can disguise the dappling effect, making it hard to figure out whether your doxie is a double dapple until they reach adolescence and their coloring begins to fade.

Double dapple dachshunds are often confused with piebalds as they both feature large white, asymmetrical areas on their body.

Some dogs may also have vitiligo, a rare condition that causes a loss of pigment in the skin and fur. Sadly, the easiest way to tell if your dachshund is a double dapple is by looking at their eyes.

Double dapple doxies almost always have vision problems, which can manifest as micro (small) eyes, wall eyes (eyes pointing in different directions), and a loss of pigment around the eyes.

Both single dapple and double dachshunds are prone to a few health issues, though the latter is at a higher risk of certain conditions.

Like many light-colored dogs, dapple doxies are sensitive to sunlight, so their skin needs to be protected with a dog-safe sunscreen (one that doesn’t contain zinc oxide or zinc oxide or para-aminobenzoic acid) in hot weather.

That being said, many single dapple dachshunds are completely healthy – most of these health issues are seen in double dapples.

Double dapple dachshunds that are also long- or wire-haired are particularly at risk of developing PRA, a degenerative eye disease that eventually results in blindness.

In addition, many double dapple puppies are born deaf or with absent or malformed eyes and/or ears, glaucoma, blindness, cataracts, deafness, and missing vital organs.

Dapple dachshunds are typically more expensive than other coat patterns as they are rarer. Additionally, creating this coat pattern requires a lot of care to get right, especially to avoid litters with the double merle gene.

While the cost of a dapple dachshund greatly varies from country to country, you can expect to pay anywhere from $400 to $2,500, with dogs with higher quality genetics and more intense dappling colouration normally on the higher end of that range.

Should You Breed Dapple Dachshunds?

Breeding single dapple dachshunds with non-dapples doesn’t carry the same risks as breeding two dapple doxies together, making it a much safer choice. However, as mentioned earlier, even one or two small spots make a dog a dapple!

In addition, some dachshunds have very subtle dappling that is disguised by their base color, which can make them easily misidentified as a non-dapple. This can result in two dapples unintentionally being bred together.

It’s important to check both the male and female dog over for signs of dappling before you attempt to breed them.

It’s also a good idea to get both dogs seen by a vet to ensure they are in good health and safe to mate, especially the mother.

Once both dogs have been given the all-clear by a vet and you’re certain that neither or only one of them is a dapple, then you can go ahead with breeding.

Raising puppies is a lot of work as you’ll be caring for them for a minimum of 8 weeks  – make sure you have the time, money, and knowledge to care for the mother and pups.

The costs of vet bills, food, vaccinations, equipment, etc, all add up, especially when you’re caring for more than one dog.

Dachshunds can have between 1 to 8 puppies per litter, but 4 to 5 is most common, so that’s a lot of mouths to feed!

Should I Get A Dapple Dachshund?

Dapple dachshunds are definitely one of the most unique and attractive coat patterns in the breed, so it’s no wonder why they are so sought-after.

Single dapple dachshunds are slightly more prone to some health issues, though the vast majority of them go on to have completely healthy lives, especially if you make sure to buy from a reputable breeder.

If you like the appearance of a single dapple dachshund, there’s no reason not to get one as long as you know how to correctly care for the breed and understand the responsibilities that come with owning a dog.

However, most dachshund owners and breeders discourage the act of purchasing a double dapple doxie due to their unethical breeding practices.

As mentioned earlier, many double dapples are born with a vast number of health problems that greatly affect their quality of life.

Buying a double dapple dachshund increases their demand and supply so unreputable breeders can capitalize on their popularity. Before you purchase a dapple dachshund (or any dog, for that matter), make sure you research the breeder properly.

Don’t be afraid to ask questions about the puppy’s parents, siblings, and whether the breeder is aware of the problems associated with the double merle gene.

As always, be on the lookout for signs that could indicate that the breeder is untrustworthy, such as dirty living conditions, pups and parents in poor health, selling puppies in large numbers, letting puppies leave before they are 8 weeks old, and not letting you view the mother and father.

These are all big red flags – chances are, the person is a backyard breeder or the puppies are from a puppy farm.

Trust your gut – if you think something isn’t right or get the feeling that the puppies are being mistreated or have come from puppy farm, don’t purchase from the breeder, as hard as it can be to walk away.

Sadly, buying a dog from a backyard breeder or puppy farm will only encourage them to breed more puppies so they can continue to profit off their misfortune.

Furthermore, most puppies raised in these places are extremely unhealthy, which means you’re likely to be hit with an expensive vet bill later down the line.

Although beautiful, dapple dachshunds are at a slightly higher chance of developing hearing and vision problems, as well as some other health concerns.

These risks are especially prominent in double dapple dachshunds, which is why you should avoid breeding or buying doxies with the double merle gene.

The majority of double dapple dachshunds are born with malformed or missing eyes, ears, and other vital organs, or develop numerous health concerns in later life.

If you want to own a dapple dachshund, it’s best to go for a single dapple from a reputable breeder to ensure your new companion is as healthy as possible.