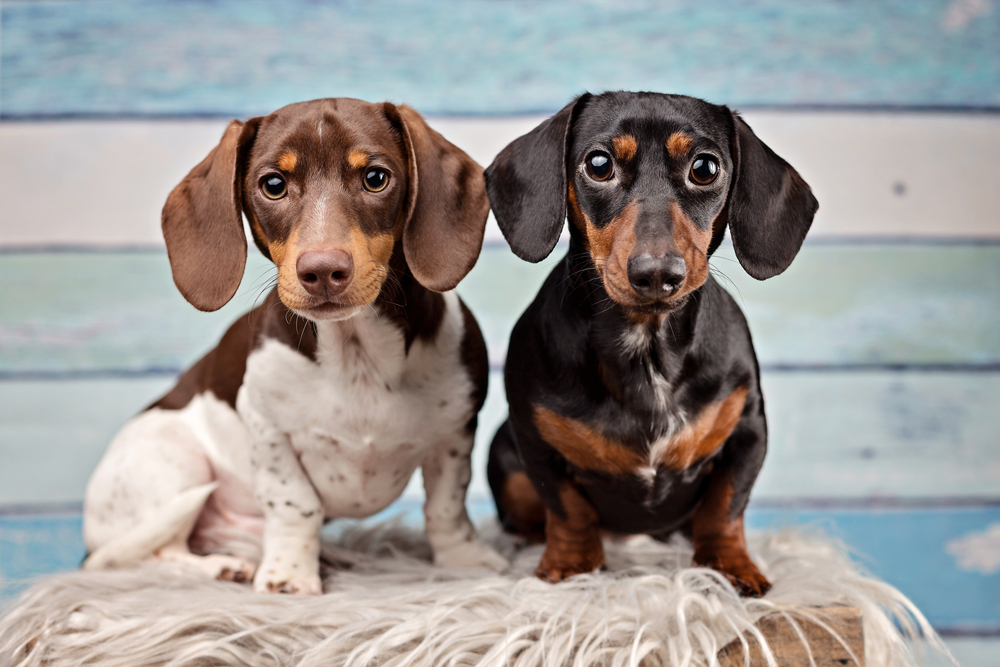 If you are planning on getting a dachshund, whether a standard size, a mini, or a tweenie, and whether you are looking at smooth haired, long haired, or wire haired, something else to consider is what kind of coat pattern you prefer. One of these patterns is known as piebald. So, what is a piebald dachshund?

A piebald dachshund has a base coat that consists of either one solid color or two colors, along with large patches or areas of white. A piebald pattern simply refers to a coat that features a pattern of unpigmented spots, this being white, on a pigmented background.

What Is A Piebald Dachshund?

Well, in order to get a piebald dachshund, both of the parent dogs must carry the recessive piebald gene. Whether or not both the parents have the piebald pattern or just carry the gene doesn’t really matter.

A parent dog may carry the piebald gene without actually appearing to be a piebald. That said, if breeders want to make a litter of piebald dachshund puppies, using two piebald dachshunds as parents is a rather surefire way to do so.

There is a bit more to it than that, because the more white a piebald dachshund has on its coat, the stronger or more prominent that recessive gene is.

The issue here is that this recessive piebald gene is linked to a number of health issues, which is why piebald dachshunds tend to have more health problems than other types.

Due to this, breeders must be very careful that they choose parent dogs that don’t have all too much white on them, because this may cause puppies to be excessively white, and although it sounds odd, this can and often does have a direct impact on their overall health.

There are tons of piebald doxie breeders in the USA and Canada, but due to the health issues associated with that recessive gene, the UK Kennel Club does not accept them as a breed standard.

They generally have fairly large areas of white. On some piebald dachshunds, it may look like their main coat is some kind of shade of brown, red, and/or black, with a good amount of white spots.

Other piebald dachshunds may have much more white, to the point where it looks as though the main color is white, with patches of various shades of brown, red, and/or black.

For the most part, piebald dachshunds are about 80% white or more. In most cases, to be seen as a piebald, a dachshund must not have more than 50% white on its head, and as long as it doesn’t cover their ears or go around the eyes.

Some piebald dachshudns may have just a white chest and white belly, with the rest of the dog having the colored base coat.

Generally speaking, the vast majority of piebald dachshunds have white tips at the ends of their tails, along with white paws, and sometimes even white or partially white nails.

The piebald dachshund always has brown or black eyes, but never blue like dilutes or double dapples.

Can You Get All White Piebald Dachshunds?

There have been super rare cases of piebald dachshunds being all white, but this is not a good thing.

Remember that the piebald gene is a recessive one which often leads to serious health problems.

The more white a piebald has on it, the stronger this recessive gene is, and the more health problems it is likely to have.

Most of them will at least have some colored spots on their heads, but even this is seen as bad.

Generally speaking, you won’t ever find an all white dachshund, especially not from any sort of reputable breeder.

An all white piebald dachshund, if such a thing does exist, would certainly not have the best health.

What Is An Extreme Piebald Dachshund?

However, the issue here is of course that the recessive piebald gene will cause serious health problems.

Therefore, breeding piebalds with the aim of being extreme or mostly white is seriously frowned upon.

This type of breeding is seen as cruel, and it’s not accepted by any reputable kennel club.

There’s just way too high of a chance of the dogs in question having serious health issues due to that strong recessive piebald gene.

Ok, so one of the things that we are not going to do here is to get too deep into the science and genetics of it. There’s just too much hardcore genetics involved here.

Now, what does need to be said is that the piebald pattern in of itself is does not seem to be associated with health issues, but dogs that have this recessive piebald gene, especially those with a whole lot of white on their coats, do appear to have a higher risk of developing health issues.

Generally speaking, there is actually just one specific health issue directly related to the piebald gene, but that said, piebald dachshunds may also be more susceptible to developing the most common health issues that all dachshunds are prone to suffering from.

What Is The Difference Between Piebald And Dapple Dachshunds?

First off, dapple and piebald dachshunds may look similar, but there are some defining physical characteristics that you can examine to figure this out.

First and foremost, whereas piebald dachshunds have either one or two coat colors along with all that white, dapple dachshunds usually have small and irregular specks of color in a variety of shades.

The spots or blotches on piebalds tend to be much larger and often symmetrical too, whereas dapples often have very small and irregular spots of many colors.

They may have predominantly white coats, but they do appear more blotchy and speckled than piebald doxies.

Moreover, a piebald dachshund must have spots on the body and must have colors ears and colored areas around the eyes, whereas dapple dachshund may or may not have this.

We realize that this is very hard to visualize, so thank god for visual aids!

Now, in terms of genetics, what is important to know is that dapple dogs all have a specific gene, the merle gene, which causes this dapple pattern to occur.

Now, the merle gene is actually a dominant gene, which means that only one of the parent dogs has to have the merle gene for the puppies to be dapple.

This is unlike that recessive piebald gene (recessive, not dominant), where both parent dogs have to have it for the puppies to turn out piebald.

While in the 1800s and the early 1900s, the piebald dachshund may have been rare, it certainly is not so anymore.

The piebald dachshund is quite sought after and very often bred. There are tons of breeders in the USA and Canada that specialize in piebald doxies.

The most common ones you will find are brown and white, black and tan, chocolate and tan, and red and white.

How Long Do Piebald Dachshunds Live?

This recessive piebald gene generally has no big effect on the lifespan of the dachshund.

Just like most other standard size doxies, they’ll usually live for up to 14 years, sometimes 15 years, with miniature piebald doxies usually topping out at 16 or sometimes 17 years of age.

Can You Breed Two Piebald Dachshunds?

However, just be careful that at least one of the parents does not also carry the dapple gene, because this could end up creating double dapple dachshunds, and these are known for having huge health issues.

Let’s keep in mind that not all breeders think that the piebald is an ethical pattern to breed into dachshunds, which is due to the possible health issues it may lead to.

How Much Does A Piebald Dachshund Cost?

Piebald doxies are not the cheapest of dogs out there. It does really depend on the breeder, as some will say that their piebald pups are super rare.

There you have it guys and gals, everything you need to know about the piebald dachshund. Remember, there are plenty of other coat patterns out there, so don’t make a final decision just yet!