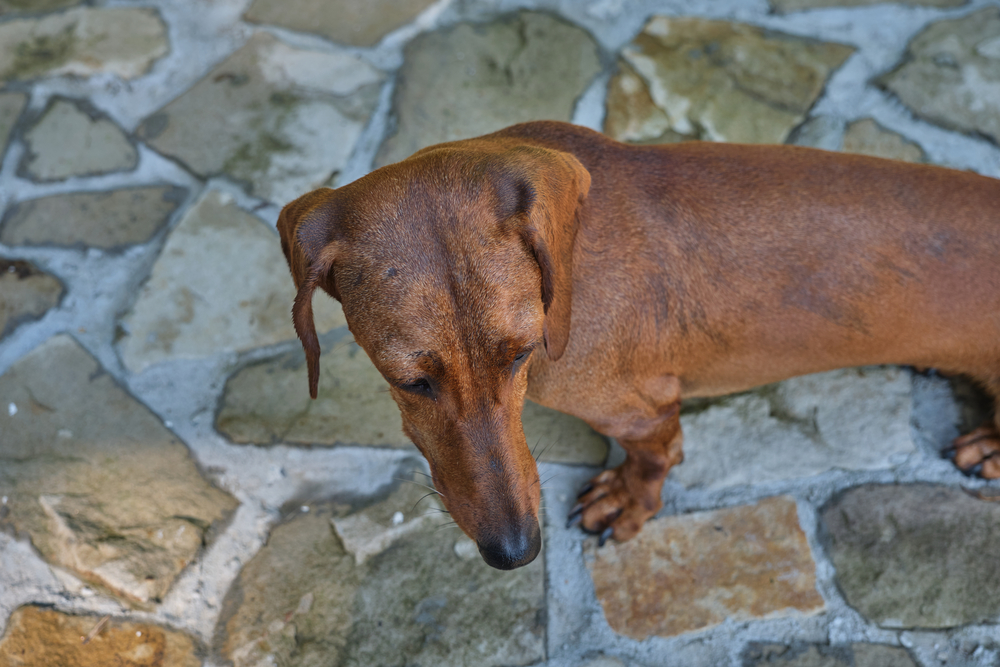 If your female dachshund is behaving a little differently than usual or has started showing some strange physical changes, there’s a good chance that she’s in heat.

All unspayed female dogs go through estrus, so it’s important to understand the signs of the process so you can keep your dachshund safe and comfortable.

But when do dachshunds go into heat? Dachshunds usually get their first heat cycle around 6 months to 12 months of age. Most dogs will go into heat once or twice a year.

If you suspect your female dachshund is in heat or is nearing her first estrous cycle, don’t worry, we’ll be sharing some tips and advice to help you and your four-legged friend get through the process together!

What Does Going Into Heat Mean?

When a female dog “goes into heat”, it means she is physically ready to mate with a male dog.

During this time, the female’s estrogen levels will rise, then decrease sharply, causing her ovaries to release eggs.

A female dog in heat will be receptive to mating, so it’s important to keep her away from male dogs for the duration of her cycle, otherwise, you run the risk of her falling pregnant.

What Age Does A Dachshund Go Into Heat?

Most female dachshunds come into heat around 6 months to 12 months of age, though some dogs may not get their first estrous cycle until they are as old as 18 months.

It’s also not uncommon for young dachshunds to enter heat earlier if they live with an older, unspayed female dog.

What Age Do Dachshunds Stop Going Into Heat?

All female dogs, including dachshunds, have heat cycles for the duration of their lives, but their fertility and the frequency of their cycles will decrease with age.

Although it’s possible for an older dachshund to conceive, it’s unsafe for them to do so as they are at risk of pregnancy complications such as stillbirth, difficult delivery, and pyometra.

Most vets advise retiring females from breeding once they are around 5 years of age, especially for small breeds like dachshunds.

However, it’s best for dachshunds to have their first litter before the age of 4 or 5 but no younger than 2.

How Often Do Dachshunds Go Into Heat?

The majority of unspayed dachshunds go into heat every 6 to 9 months, but it can take up to 2 years for their estrous cycles to regulate. Once your dachshund enters their senior years, their heat cycles will be less frequent.

Additionally, older dachshunds may not display physical or behavioral signs associated with estrus (known as a “silent season”), so you might not notice when they are in heat.

How Long Does A Dachshund’s Season Last?

A dachshund’s season usually lasts between 21 to 28 days, though some females may have slightly shorter or longer cycles. There are 4 phases of the estrous cycle, all of which normally span around 7 days.

While your dachshund can become pregnant at any stage during her cycle, her most fertile window is around 7 to 9 days after going into heat. This fertile period usually lasts 5 to 7 days.

Signs & Symptoms Your Dachshund Is In Heat

Stages Of A Dachshund’s Heat Cycle

While your dachshund is in heat, she will go through 4 phases, all of which can be recognized by different behavioral and physical changes.

Below are all the phases your dachshund will experience during her heat period.

Proestrus is the first phase of the heat cycle where your dachshund’s body is preparing to breed. During this stage, your dog will usually have blood-tinged discharge and a swollen vulva.

She may also lick excessively around her genital area, be more affectionate or clinger than normal, hold her tail close to her body, and show aggression towards male dogs.

The estrus stage is the mating stage of your dachshund’s heat cycle. She will be receptive to males and will usually urinate frequently to signal to other dogs that she is ready to mate.

Despite urinating more often, your dachshund’s vaginal discharge will begin to slow and may take on a yellow or straw color.

As your dog’s body is ready to breed, your dachshund will seek out male dogs with her tail held to one side. She may also be aggressive towards other females.

The third stage of the estrous cycle is known as diestrus and follows immediately after the “in heat” phase.

Your dachshund’s body will begin to return to normal or, if successful mating has taken place, undergo changes for pregnancy.

The vulva will go back to its normal size and vaginal discharge may return to a bright red color before disappearing completely. Your dachshund will also no longer show interest in male dogs.

Anestrus is the last stage of your dachshund’s heat cycle (also called the “resting phase”) and is the time between diestrus and the next proestrus.

Your dog will no longer have discharge, a swollen vulva, or any other signs associated with the earlier stages of her cycle. Her body will use this time to prepare for the next possible pregnancy.

How Can I Help My Dachshund When It’s In Season?

Being in heat can be stressful for your dachshund as she will undergo many physical and behavioral changes.

But don’t worry, we’ll be giving you some tips to help your dachshund while she is in season to make the process less uncomfortable and nerve-racking for both of you.

While your dachshund is in season, it’s a good idea to tire her out and distract her by setting time aside for play sessions and exercise. This will help relax her and release any aggressive energy she may have.

Make sure your backyard is enclosed or secure if you’re playing outside as a female dog in heat may attempt to escape to find male dogs to mate with. Additionally, keep your pooch on a leash during walks and limit your distance from other dogs.

If you can, try to walk your dachshund at a quiet time of day when there are fewer distractions and dogs around.

Some female dachshunds in heat produce a lot of bloody discharge and may attempt to spread their scent around your home, so using dog diapers can help you keep your floors and furnishings clean.

However, if your pooch doesn’t produce much discharge and keeps herself clean, then diapers may not be necessary.

Masking your dachshund’s scent while she is in heat can help deter males, which is useful during walks.

More frequent baths with an odor-controlling dog shampoo will keep your pooch clean and reduce her heat scent.

Some owners use dog cologne or pet-safe deodorant to help hide their female’s scent, whereas others believe that putting liquid chlorophyll in your dog’s water will work to disguise her scent.

The latter also assists with healthy teeth and gums, as well as a fresher breath.

However, make sure you consult your vet before you give your dachshund this type of supplement.

Some dogs can get an upset stomach from chlorophyll, especially if they are sensitive to plant-based ingredients.

Many dogs in heat are much more affectionate and clingier than usual, so if your dachshund is seeking attention from you, be sure to give her plenty of love and cuddles.

She’ll no doubt enjoy the extra fuss and will likely be calmer and more relaxed as a result.

Use Calming Treats, Scents, And Sounds

Dog calming treats, sprays, and plug-in diffusers can help reduce your dachshund’s anxiety or stress levels while she is in heat to make her feel more comfortable. A dog speaker that plays music aimed to alleviate stress can also be advantageous.

During your dachshund’s heat cycle, try to keep her environment as quiet as possible. Keep the TV or radio on a low volume and avoid yelling/making loud voices so you don’t spook your pooch.

Use An Anxiety Vest

Dog anxiety vests or wraps are designed to reduce nervousness and stress levels in dogs during specific situations.

They calm down your dachshund naturally by applying gentle pressure to their body, similar to swaddling a baby.

Female dogs in heat are usually more agitated or anxious than usual, so these types of garments can work wonders for relaxing your dachshund.

Can You Prevent A Dachshund From Going Into Heat?

There are two methods to prevent a dachshund from going into heat: surgery and hormonal drugs (contraceptives).

Most spay operations are ovariohysterectomies, which involves full removal of the female reproductive tract, including both ovaries and the uterus.

This surgical procedure is irreversible, so your dachshund will no longer experience heat cycles or be able to have puppies.

Your dog will be under general anesthesia during the operation, but don’t worry – there are very few risks of this procedure when it is carried out by a veterinarian.

Alternatively, some veterinarians recommend an ovariectomy, which is when only the ovaries are removed. Speak to your vet to see what they advise for your dachshund.

Hormonal drugs can prevent heat cycles, but this option is rarely recommended due to risks and side effects, including a potentially life-threatening infection called pyometra.

Additionally, there are currently no approved medications to stop or regulate estrus in dogs in Canada and the United States, only European Union countries.

Not only does it reduce the risk of uterine infections and breast tumors, but it also prevents ovarian and uterine cancers.

According to PetMD, spayed dogs live 23% longer than unspayed dogs, so your dachshund will have a healthier, happier life.

So, to sum up, all female dachshunds who have not been spayed get their first heat cycle around 6 months to 12 months of age, so make sure you recognize the signs of the process so you can support your pooch during this time!

The average heat cycle for a dachshund lasts between 21 to 28 days and usually occurs once or twice a year.

Unless you’re planning on breeding your pooch, it’s best to get her spayed to prevent unwanted pregnancies and reduce the risks of health issues like uterine infections, uterine cancer, and breast tumors.