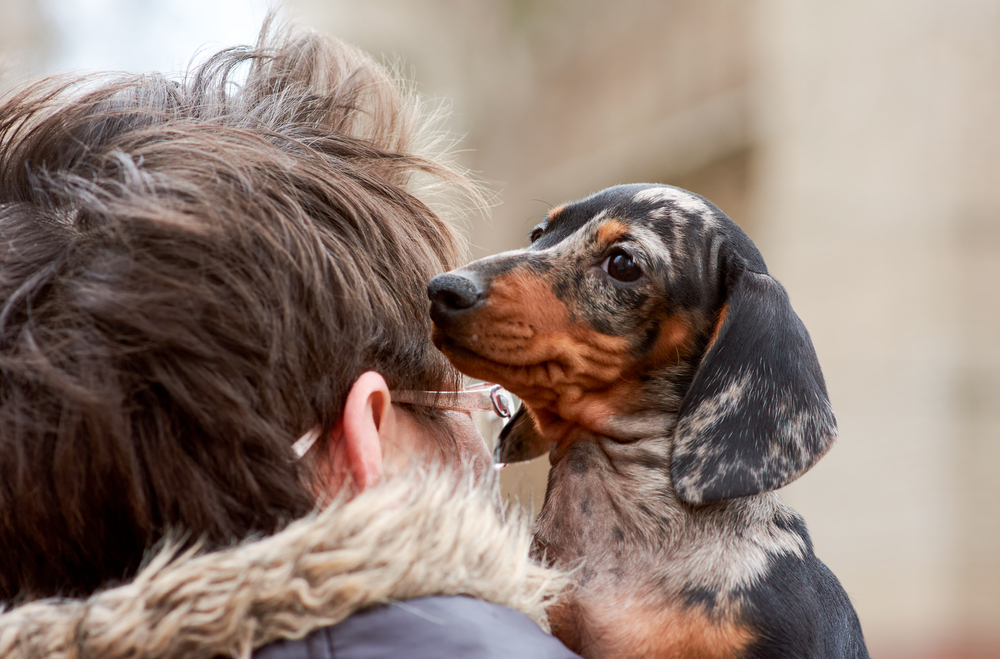 The dachshund’s loving personality is one of the reasons why the breed is so special, but sometimes this devotion can verge a little on the excessive.

So, why are dachshunds so needy? Dachshunds, like all dogs, are pack animals, so they naturally seek companionship and comfort from other members in their “pack”. Additionally, these dogs are known for developing tight-knit bonds with a single person, often to the point where they become overwhelmingly clingy towards their favorite human.

There are some other reasons why dachshunds can act needy, which we’ll be going over in detail below, so be sure to stick around!

Why Are Dachshunds Clingy And Needy?

One of the dachshund’s trademark traits is their affectionateness, which can often develop into clinginess and neediness. A common reason why dachshunds are so clingy is simply that it’s in their nature!

These loving, loyal dogs thrive on attention and will stop at nothing to get a belly rub or a warm lap to cuddle up on, especially from their favorite owner.

As you might have already discovered as a dachshund owner, this breed will usually bond closely with one person in their household.

This often manifests as clinginess, sometimes to the extent of being almost obsessive or protective of their owner.

If you’re the person that feeds, walks, plays, and cuddles with your dachshund the most, it’s highly likely that your pooch will become the most devoted to you.

I have two dachshunds myself, but only one of them is what I like to call my “second shadow”. She refuses to sit on anyone else’s lap and will only entertain being brushed, bathed, or walked by me.

I think her clinginess towards me is because I looked after her the most when she was a puppy, so she views me as her primary caregiver!

Another reason why dachshunds are needy is due to them being pack animals. It’s in their natural instinct to want to be close with other members of their household. Dogs are social creatures, so they seek comfort and attention from their “pack”.

Additionally, dogs instinctively follow the “alpha” in the pack, which should be you if you’ve trained your pooch properly.

If your dachshund is constantly behind you whenever you go anywhere, it could be due to their natural impulse to follow the leader.

Excessive clinginess in dachshunds can be a sign of separation anxiety, particularly if you notice your pooch becoming increasingly distressed when you’re out of the house or leave them to their own devices.

Other signs of separation anxiety in dachshunds include pacing, panting, barking/howling, chewing, digging, drooling, and urinating or defecating inside the house.

Dachshunds can develop separation anxiety due to poor leadership (i.e, you’re not a strong authoritative figure), a change in ownership, a new home or environment, change in schedule, loss of a family member, or being left alone for the first time.

It’s also important to note that if you fuss over your dachshund too much, they can become overly reliant on you, which can lead to separation anxiety and neediness.

Is A Needy Dachshund A Cause For Concern?

A needy dachshund isn’t normally a cause for concern, but if your pooch has recently become clingy and started displaying other behaviors out of the ordinary, it may need looking into by a veterinarian to rule out an underlying health issue.

If your dachshund has suddenly started acting needy, below are some possible causes for their new trait.

If your dachshund is in pain or unwell, they may gravitate towards you more to feel safe and comforted.

It’s important to get your pooch checked by a veterinarian to make sure their newfound neediness isn’t due to an injury or illness, especially if they appear to be in good health otherwise.

Change In Routine or Environment

Dachshunds are highly sensitive to changes in their schedule or environment, which can lead to neediness and clinginess.

Moving house, a different work pattern, a new baby, a new pet, or the death of a family member can all upset your dachshund and cause them to be more attention-seeking than usual.

Fireworks, construction work, thunderstorms, or even a heated argument between family members can be stressful and scary for dachshunds, causing them to act clingier than usual.

Alternatively, if your dachshund is being bothered by another dog or there are small children in your household being overly rough with your pooch, they may naturally seek out attention and comfort from you.

Loss of Eyesight or Hearing

If your dachshund is elderly, there’s a possibility that they may be going blind or deaf, which can cause them to be needier than they were in their younger days.

It might be a good idea to book an appointment with your vet to get your pooch’s hearing and eyesight checked out.

Unspayed female dachshunds are often clingier than normal during their heat cycles.

Alternatively, your dachshund may be suffering from a phantom pregnancy or even a real pregnancy if she has been around male dogs while in heat.

How Can I Stop My Dachshund Being So Needy?

While a cuddly and affectionate dachshund can be adorable, there are times when it becomes a bit overbearing, especially if it’s stopping you from doing your normal routine.

If you’re struggling with a needy dachshund, here are some ways you can curb your pooch’s excessive clinginess.

If your dachshund is constantly following you around or frequently begging for attention, make sure you don’t reward this inappropriate behavior, even unintentionally.

For instance, if your dachshund paws at you to be picked up or be let onto the couch, don’t give in to their demands!

Instead, offer praise and a treat when your dachshund does something independently, such as laying on the floor or sleeping in their basket.

This will reduce your pooch’s dependency on you and encourage them to be more relaxed.

Let Other Household Members Look After Your Dachshund

If there are other people in your household, share some of your dachshund’s care duties with them as this will stop your pooch from being overly reliant on you.

For instance, if you have a partner or older children, they can take on some of the feedings, walks, and play sessions to try and reduce your pooch’s neediness.

To build up your dachshund’s confidence and independence, you should subject them to new smells, sounds, sights, strangers, and other dogs on a regular basis.

This might involve going to a different park or scheduling a play date with a doggy friend. The more you socialize your pooch and introduce them to new things, the less anxious they will be!

Separation anxiety in dogs can be a real nuisance, especially as it can seem like you can’t leave the room without upsetting your pooch.

However, it’s important to teach your dachshund that you can’t be with them 24/7 and sometimes they need to be alone.

The trick is to give your dachshund scheduled alone time every day to help them grow more accustomed to being by themselves.

You’ll need to gradually build up your pooch’s tolerance, so start off with a few minutes initially, then increase the duration to a few hours.

Setting clear boundaries (such as the couch or bed being off-limits) for your dachshund is important for preventing a clingy, overly dependent dog.

Ideally, you should have made these boundaries during your dachshund puppy years and stuck to them!

For example, I don’t let my dachshunds sleep in my bed, a rule I have consistently adhered to since I first brought them home at 10 weeks old!

Do Dachshunds Get Attached To One Person?

As we established earlier, dachshunds have a tendency to become attached to one person in their family, often to the point where they become overly jealous and protective of their favorite human.

That being said, some dachshunds are less fussy when it comes to attention – they’ll gladly accept a belly rub or cuddle from anyone in their household!

A lot of it boils down to your dachshund’s personality and individual nature.

It’s no secret that dachshunds are incredibly loyal and affectionate dogs, but if your pooch’s clinginess is getting out of hand, it can be frustrating.

Although the breed is usually needy by default, particularly towards a single person in their family, there are other reasons that can influence this type of behavior.

Separation anxiety, heat cycles, an underlying health condition, change in environment or routine, and accidentally rewarding clingy behavior can all cause excessive neediness in dachshunds.

As always, if you’re concerned or notice any other abnormal behavior in your pooch, don’t hesitate to get checked out by a veterinarian.