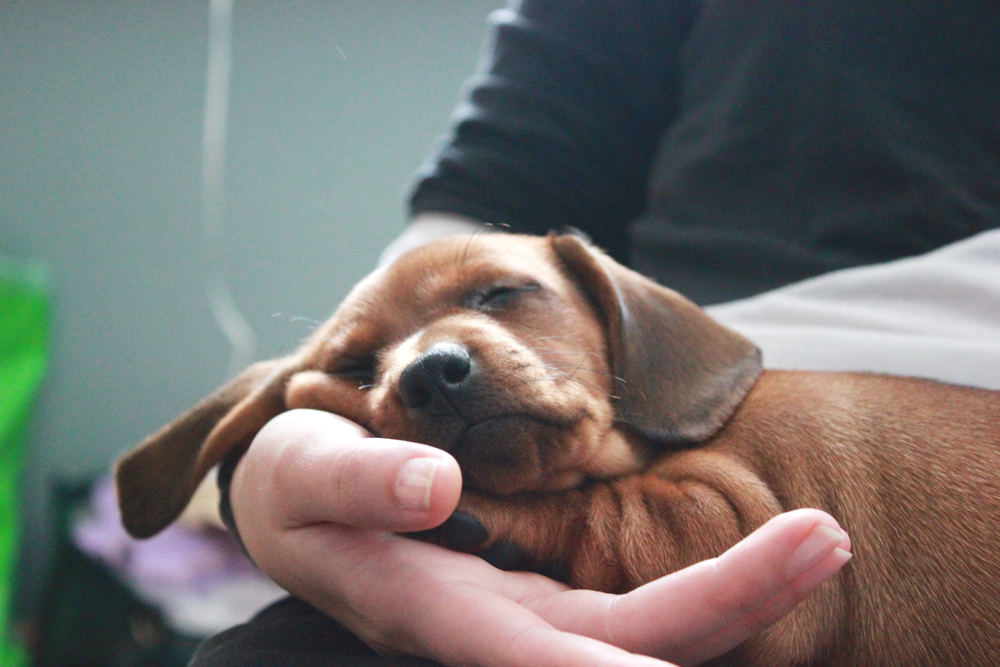 As a dachshund owner, you’ve probably noticed that your pooch can spend a large portion of the day curled up in a ball asleep. You may have wondered if this is normal and whether it’s something to be worried about. So, why do dachshunds sleep so much?

There are numerous factors that can influence a dachshund’s sleep pattern, including boredom, stress, and underlying medical conditions. However, in most cases, dachshunds sleep a lot simply because it’s normal behavior! This breed usually spends between 12 to 14 hours a day in a peaceful slumber.

If your dachshund is sleeping more than this, don’t worry, we’ll be going over some other of the most common reasons why your pooch could be sleeping excessively.

Is It Normal For Dachshunds To Sleep A Lot?

In most cases, it’s completely normal for dachshunds to sleep a lot, especially if they’re young or elderly.

So, if you notice your pooch causing mayhem one minute, then dreaming the day away the next, it’s just typical dachshund behavior!

That being said, if your dachshund has started sleeping considerably more than usual or is displaying abnormal symptoms such as lethargy, a decrease or increase in thirst/appetite, limping, panting, and frequent or infrequent urination/defecation, then it could be due to an underlying medical condition.

This condition happens when your pooch’s thyroid stops producing enough hormones to keep their metabolism working efficiently, causing it to slow down.

Another health issue that can cause dachshunds to sleep more than normal is anemia, which occurs when your companion’s body stops making enough red blood cells.

Stomach ulcers, cancer, and other injuries or conditions that result in severe blood loss can also cause anemia.

If you’re worried about your dachshund’s sleeping habits or notice any strange symptoms such as the aforementioned ones, it’s best to get your pet checked out by a vet so they can investigate further.

How Much Sleep Do Dachshunds Need?

Dachshunds need a hefty amount of sleep each day – a lot more than an adult human! The average full-grown dachshund sleeps for between 12 to 14 hours daily, so they spend around half the day napping.

Dachshund puppies need even more sleep than their adult counterparts, typically snoozing for 18 to 20 hours a day.

Seniors also need ample shuteye, so don’t be surprised if you find your elderly dachshund sleeping for around 12 to 18 hours a day.

Puppies need extra sleep as they are still growing and developing new skills – it’s hard work learning how to be a dog!

While seniors have long since finished growing, they still need plenty of rest due to reduced energy levels, declining senses, and simply because their body is slowing down as a result of old age.

Reasons Why Dachshunds Sleep So Much

There are many reasons why dachshunds sleep so much, but we’ll be going over some of the most common ones to help you figure out why your pooch might be napping a bit more than usual.

Although dachshunds have been domestic pets for hundreds of years, they were initially bred for hunting.

This activity requires a lot of physical strength, so it was normal for dachshunds to sleep in-between hunts in order to preserve as much energy as possible.

The modern dachshund still has this natural instinct, which is why they nap frequently throughout the day but are energetic and lively when they’re awake!

Dachshunds may sleep excessively if they’re not receiving enough mental or physical stimulation each day.

As you’re probably well aware, all dogs need adequate exercise and enrichment to keep their mind sharp and bodies healthy.

If you’re not walking your dachshund enough or finding time to play with them daily, it can lead to boredom, stress, and destructive behavior.

Walking your pooch not only provides them with both physical and mental exercise, especially if you fit in a game of fetch or tug-of-war.

If your dachshund is more lethargic than usual, it could be a symptom of a medical condition. Alternatively, your pooch could be tired due to a health issue that is preventing them from sleeping properly.

There are a lot of health problems in dogs that can cause sleepiness, but some of the most common ones include:

If you suspect your dachshund is unwell or spot any abnormal symptoms, book an appointment with your vet straight away so they can advise the right treatment and best way forward.

As dachshunds enter their senior years, they need more rest to rejuvenate due to the natural process of their bodies slowing down.

While there are varying opinions on what age dachshunds are considered senior, around 8 to 10 years old is the most popular belief.

Dachshunds have excellent hearing (they were bred to hunt small prey, after all!), making them great little watchdogs, especially at night.

If your pooch feels unsafe or threatened in their environment, they may be awake more often during the evening to keep guard, causing them to nap more during the day.

Dachshunds don’t need to be active and alert as they used to be as their main purpose in the modern day is companionship.

Their homes are comfy and warm, so you can’t really blame them for wanting to laze about, particularly with their favorite person!

Dachshunds and other dogs have similar sleep cycles to humans, but their cycles are much faster and shorter than ours. While we may go through 4 to 5 cycles per night, a dachshund can go through between 15 to 20!

Dogs also sleep in short bursts throughout the day, usually around 45 minutes at one time, whereas humans sleep in one big stretch at night.

The first stage of sleep is when your doxie has just settled down for a nap and is lightly snoozing. This phase involves NREM (non-rapid eye movement) and SWS (slow-wave sleep) sleep.

Your pooch’s muscles will start to relax, so you might notice the odd twitch, but they can still be easily woken up. After around 10 to 20 minutes of light sleep, your dachshund will enter the REM (rapid eye movement) stage.

During this phase, dreams normally occur and your doxie will be hard to wake up. You may also notice muscle or whisker twitching, whimpering/barking, eye movement, a tense jaw, or “running” behavior.

Most dogs only remain in the REM stage for around 6 minutes, but puppies and small dogs like dachshunds tend to stay in it for longer. Small breeds and young pups also have more frequent but shorter dreams.

Dogs go through NREM and REM sleep twice during a nap, spending the majority of their time in the former.

Yes, dachshunds do dream! Dogs dream similarly to humans, so they think of normal experiences that happen in their daily lives.

For instance, your doxie could be dreaming of running across a wide open-field, cuddling with their favorite owner, or eating some tasty treats.

Dogs can also have nightmares of things that cause them anxiety, such as bath time, grooming, vet trips, or any other experiences that they are fearful of.

Why Do Dachshunds Sleep On Their Backs?

It’s not uncommon to find a dachshund on their back in a peaceful slumber, but aside from looking cute, there’s a reason behind this behavior.

Dachshunds lay on their backs to help regulate their temperature and cool down as there is less fur on their stomach.

In addition, a dog’s belly is their most vulnerable area – exposing this part to you means they feel completely safe in their environment!

Do Dachshunds Sleep Through The Night?

A healthy full-grown dachshund will easily sleep through the night, though they might alert you if they hear a strange sound.

Puppies over the age of 4 months should be able to sleep through the evening provided they have been undergoing potty training.

Pups below this age will need to be taken outside a couple of times during the night to use the bathroom, so be sure to set an alarm.

What Should I Do If My Dachshund Is Sleeping Too Much?

If your dachshund is sleeping a lot more than the average duration for this breed, first thing’s thing: don’t panic.

Your pooch’s excessive napping could be down to something such as not receiving enough exercise or mental stimulation.

This can be easily fixed just by increasing your dog’s daily walks, playtime, and the number of toys they have. Interactive puzzle toys in particular are a fantastic way to keep your dog entertained.

If your dachshund is already receiving enough physical and mental exercise, young or old age could be the root of their sleepiness. As mentioned earlier, both puppies and seniors sleep considerably more (almost double the amount!) than adults.

If the aforementioned factors don’t apply to your dachshund, then it’s a good idea to get them checked out by a vet, especially if they’re suffering from other symptoms alongside lethargy.

A wide range of health issues can cause excessive sleeping in dogs, including hypothyroidism, diabetes, parvovirus, canine distemper, heartworm, and leptospirosis, so it’s important to act fast.

Although it’s normal for dachshunds to spend a large portion of the day asleep, if they are lethargic while awake or exhibit unusual symptoms, don’t delay in getting them checked out by a vet. It’s always better to be safe than sorry!

A healthy adult dachshund should be sleeping for around 12 to 14 hours a day, with puppies and seniors sleeping for up to 18 hours (more if they are extremely young).

As long as your pooch is lively and energetic during the day, and seems normal otherwise, their sleepiness is likely nothing to worry about.