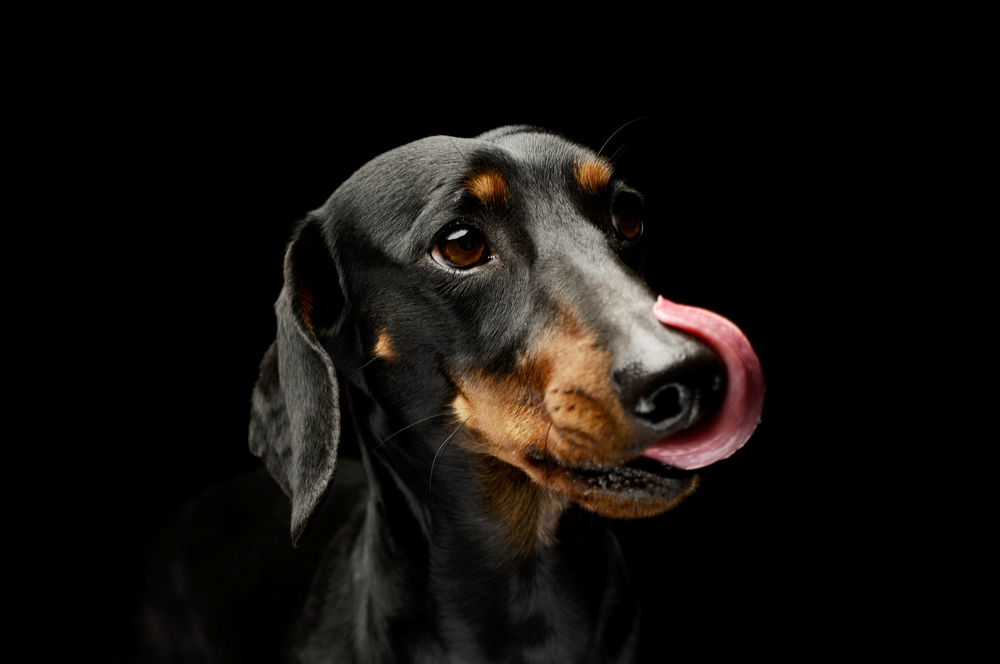 A bit of licking here and there is normal for dachshunds, especially if there’s a crumb of food that found its way on your floor or couch. However, if your dachshund is licking excessively, whether that’s household objects or their paws, it can be a cause for concern.

But, why do dachshunds lick so much? Dachshunds may engage in obsessive licking behavior due to anxiety or compulsiveness, boredom, allergies, attention, parasites, skin conditions, nausea, canine cognitive dysfunction, or pain.

If your dachshund’s licking has started getting out of hand (or paw!), don’t worry – our helpful guide will help you identify the cause and how to stop this nuisance behavior.

7 Reasons Why Dachshunds Lick So Much

There are numerous reasons why your dachshund may be licking excessively, including anxiety, boredom, seeking attention, allergies, or an illness.

Identifying the cause of your dachshund’s licking can help you nip the problem in the bud and/or select the right treatment. Below are some reasons why dachshunds lick so much.

Dachshunds can engage in excessive licking as a coping mechanism to relieve stress, anxiety, or fear from a certain stimulus, such as a loud noise, unfamiliar environment, or new situation.

If your dog is feeling overwhelmed or tense, they may lick themselves and objects around your house as a comfort.

It’s not uncommon for dogs to obsessively lick their lips or surfaces like walls, floors, and furniture when they’re feeling queasy.

If you spot the aforementioned behaviors accompanied by signs like drooling, excessive swallowing, and restlessness, chances are your dachshund is feeling nauseous.

It might be a good idea to take them outside for some fresh air or grab a few sheets of newspaper!

Another reason why dachshunds lick so much is simply for attention. If your pooch is licking something they’re not supposed to, you might look over and tell them to stop.

Doing this earns your dog’s attention, even if it’s negative, so they may lick excessively because they find it rewarding.

Alternatively, your dachshund may lick you as a way to show their affection, particularly if you offer them cuddles or belly rubs for doing so.

If your dachshund is suffering from an allergy, be it environmental or food-based, they may have itchy skin and lick the affected area to help soothe it.

Other symptoms of allergies in dogs include hives, wheezing, sneezing, diarrhea, vomiting, and a runny nose.

Removing the allergen from your pet’s diet or environment is key to reducing allergy symptoms.

For instance, if your dog is allergic or sensitive to chicken, make sure their food contains a different protein source such as rabbit or fish.

If your dachshund is not receiving enough physical or mental stimulation, they may lick their paws or other objects as a way of entertainment.

Additionally, if your companion is stressed due to a lack of exercise or enrichment, they may lick excessively to relax as engaging in this behavior releases dopamine and opioid neurochemicals.

It’s important to walk your dachshund every day and give them plenty of things to play with. Puzzle toys in particular are great at keeping your dog sharp and occupied while you’re too busy to play with them.

Senior dachshunds can develop dementia or canine cognitive dysfunction, which can cause repetitive behaviors such as excessive licking, as well as many other side effects like restlessness, forgetting commands or behaviors, disorientation, pottying inside, and failure to recognize household members/familiar places.

If your dachshund is in a confused state or their mind is beginning to decline, they may begin showing repetitive behaviors like chronic licking.

Sadly, canine cognitive dysfunction is a progressive disease, so it’s incurable. However, it can be managed with drug therapy, environmental adjustments, and nutritional supplements.

Parasites like ticks, fleas, and lice can cause inflammation and itchiness on your dachshund’s body, prompting your pooch to lick the sore area to find relief.

It’s important to stay on top of your dachshund’s anti-parasite treatments to keep them comfortable and itch-free.

How Can I Stop My Dachshund From Licking So Much?

Dealing with a dachshund with an obsession for licking can be frustrating, but thankfully, there are some ways you can reduce or even prevent this behavior.

We’ll be going over some things to do to stop your dachshund from licking so much.

Boredom and stress can lead to chronic licking in dogs, so make sure your dachshund is getting enough physical and mental stimulation each day.

Provide a range of different toys, play fetch in your backyard, go to the local park, or even hit the trails so your dachshund can explore all the new sounds, sights, and scents – this breed was bred for their excellent tracking skills, after all!

Regular exercise is important for all dogs as it improves both their physical and mental health. Besides, a happy, tired pooch is less likely to engage in destructive and compulsive behaviors like chewing and licking!

If your dachshund is an avid licker of furniture or other household objects, offer toys and chews to redirect their attention to something more appropriate.

Kongs and other treat-dispensing toys are fantastic options as they satisfy your pooch’s chewing instincts while giving them a tasty snack in return.

Use An Anti-Chew Spray

Anti-chew sprays are a good choice for dachshunds with a licking problem as they contain non-toxic, bitter-tasting ingredients to discourage chewing.

When applied to a surface, the liquid will deter your dog from licking the area simply because it doesn’t taste very nice!

These sprays can also be applied on bandages to prevent your dachshund from irritating wounds or cuts.

Allergies can cause excessive licking in dachshunds, especially if they have itchy, irritated skin.

If you suspect your dog is suffering from an allergy, it’s important to remove the trigger from their environment or food.

Among the most common food allergens in dogs are dairy products, lamb, chicken, beef, soy, gluten, and chicken eggs.

If you’re not sure what your dachshund is allergic to, use the process of elimination. This involves removing one ingredient from your pooch’s diet and monitoring their reaction to see if their symptoms improve or remain the same.

Environmental allergies are caused by substances outside or around the home, including grass, tree pollen, mold, dust, dust mites, and cigarette smoke.

Home products such as candles, air fresheners, detergent, make-up, etc, can also cause allergies in dogs.

Try to limit your dachshund’s exposure to the above to see if their licking persists.

If you think your dachshund is licking for attention, you need to stop acknowledging the behavior as this inadvertently rewards your pooch.

Rather than looking over at your dachshund and scolding them when they’re licking something inappropriate, walk away or distract them with a toy and fun activity.

They’ll either learn that licking equals zero attention or be too occupied with something else to engage in the behavior.

Should You Let Your Dachshund Lick Your Face?

With their big, doe eyes and floppy ears, it’s only natural to want to shower your dachshund with love and affection.

And due to the breed’s cuddly, loyal personality, your dachshund will be more than happy to return the favor!

However, you should avoid letting your dachshund lick your face because – aside from being unhygienic – it can be potentially dangerous. A dog’s muzzle, especially inside their mouth, is rife with bacteria, viruses, and yeasts.

Some of the bacteria found in a dog’s mouth are zoonotic, which means they can be passed onto humans. Clositidium, E. coli, salmonella, and campylobacter, all of which cause gastroenteritis, are just some of the nasties that could be lurking in your dog’s mouth.

While letting your dachshund lick your hands or arms is relatively low-risk as very few pathogens will be absorbed, dog saliva is absorbed much more easily through the mucous membranes of your nose, eyes, and mouth.

There is a higher chance of transmission of bacteria, so make sure you keep your face far away from your dachshund’s mouth.

It’s also good practice to wash your hands thoroughly after petting or touching your pooch.

Why Do Dachshunds Lick Their Paws?

It’s normal for dogs to lick their paws occasionally as part of self-grooming, but if you notice your dachshund doing it excessively, then it’s a problem that needs to be addressed.

Chronic licking of the paws in dachshunds is commonly attributed to allergies, skin conditions, boredom, parasites, gastrointestinal disorders, anxiety, a hormonal imbalance, or an injury like an irritated nail or ingrown hair behind their paw pads.

Check your dachshund’s paws to see if there is any swelling, bleeding, foul odor, soreness, or a trapped object.

If your dachshund displays any of these symptoms or is licking for an extended period of time, seek veterinary attention.

Excessive licking in dachshunds can be troublesome, especially if it’s your furniture or floors taking a beating, but fortunately, this behavior can be easily rectified provided you know its cause.

Allergies, boredom, stress, anxiety, attention, canine cognitive dysfunction, parasites, and nausea are some of the most common reasons why dachshunds lick so much.

If your pooch is constantly licking their paws, make sure you check for any soreness, swelling, injuries, or a trapped object that could be irritating your pet.

As always, if the problem persists or is accompanied by other symptoms, book a veterinarian appointment to get an expert opinion.